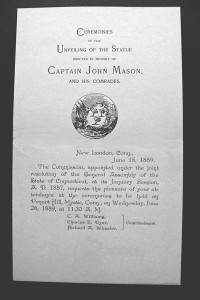 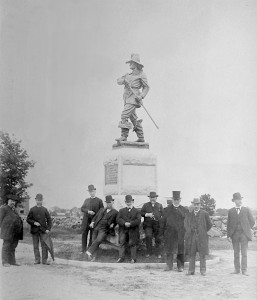 After the Civil War a statue movement was sweeping the nation – local citizens and organizations were erecting monuments of heroes and patriots everywhere. The prominent citizens of Mystic, Connecticut decided to create a larger than life bronze and granite monument of Major John Mason, the commander of the Colonial forces in the 1637 Pequot War, the very first declared and sustained conflict in the early colonies. In 1889 the John Mason Statue was placed at the intersection of Pequot Avenue and Clift Street in Mystic, Conn. near what was thought to be the location of the fortified Pequot village where the Mistick Massacre occurred. After the war the Colonial government declared the once dominant Pequot Tribe to be extinct. Even though a few survivors and their descendants continued to remain in their former territory, they were ignored along with occasional complaints about the statue being on the sacred site where their ancestors perished. The statue remained there for 103 years, that is until the early nineteen nineties when the resurgent Pequot’s managed to obtain federal recognition and build a large gambling and entertainment empire. Former and new complaints could no longer be ignored and in the spirit of a current political correctness movement and studying the sensitivity and appropriateness of the statues location, a committee chartered by the Town of Groton, CT. recommended that it be relocated. In 1996 the State of Connecticut (DEP / Parks Dept.) decided to relocate the statue of Major John Mason to the historic Palisado Green in Windsor, CT. which is where John Mason lived at the time of the war. The original plaque which glorified him for the war victory was removed and given to the Mystic River Historical Society and a new plaque outlining the Major’s career replaced it. This essentially re-birthed the statue to now represent John Mason in a more balanced and comprehensive manner for a lifetime of public service including many prominent accomplishments as the preeminent founder of the nascent Connecticut Colony

Click Here  for the  Wikipedia Biography  of Major John Mason 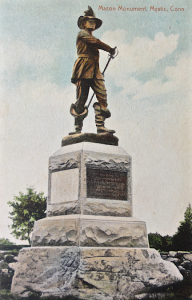 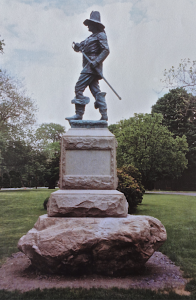